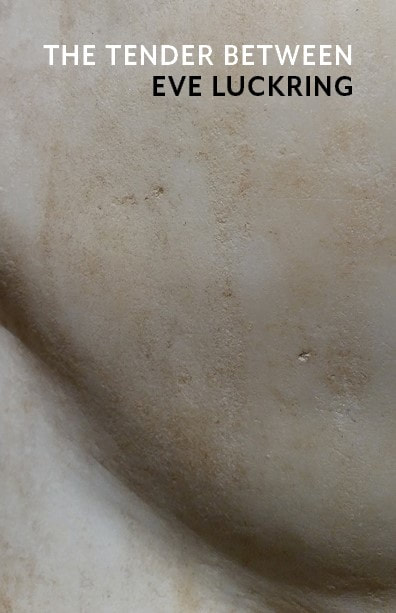 THE TENDER BETWEEN by Eve Luckring

(If you live outside the U.S., there's a good chance you'll pay less for shipping if you order from a source closer to home.)

Add to Cart
The Tender Between negotiates a linguistic terrain at once forming and falling apart. Through fragmented text and deftly recast associations, Eve Luckring questions the assumptions, and experiments with the boundaries, that define place, body, and habit. Her investigation is rooted in the physical and shaped by the influence of traditional Japanese poetic forms. This is a spare, precise poetry attentive to every syllable. As the title’s ambiguity might suggest, the tender between can’t be located using the old, familiar maps. Neither Luckring’s reclaimed language, nor the myriad shards – alive, interrelated – that animate her text are quite what they seem. In this placeless place, binaries of subject/object, nature/culture, and self/world surrender to the liminal, and “words // still pink / close to the bone” embrace the mundane and the ineffable in one breath.


Praise for The Tender Between:

"Luckring's first collection bristles with contemplative experimentation in both form and concept as it hovers in the unknown grey between becoming and unbecoming."


"The first page of Eve Luckring’s The Tender Between is almost blank, save for the page number, one word, and one small piece of punctuation; set a third of the way down the page and standing out against all the off-white surrounding it, the solo word’s comma gently rounds it off while also leading the reader’s eye right into the rest of this marvelously crafted book, by the end of which the word will have repeated several times with little additions in each instance—eventually accreting into an entire six-strophe poem!—but beginning, simply, thus:

Becoming is exactly what The Tender Between exhibits, tracks, and makes visible over the course of its 106 pages. Luckring’s ranging collection of untitled, fragmentary poems tells of many things, perhaps none more so than the complicated relationship between the part and the whole — this is a never-ending story for Luckring’s poetics, and one to which every person, every object, every word and every sound contributes its part."


"I remember almost jumping up and down with delight when I read more than one of these poems as they appeared in journals. This is a first collection of intelligent poems assembled in ways that signal the tender between the contours of things and the questions they suggest . . . Taken altogether, The Tender Between is a very effective collection of poems in wholes and fragments, vessels and flow . . . the title poem names this remarkably:  in the skin of a tiger stalking the tender between"


"The logic the collection establishes is wonderful and awe-making . . . The Tender Between is a collection to be read start to finish in a single sitting, followed by readings from any and every direction as one flips and revisits moments, letting different lines alchemize together and rebuild."
​
​— ​C.T. Salazar
"We Can Imagine Impossibility Or We Can Read Women" EcoTheo Review, December 31, 2018
​