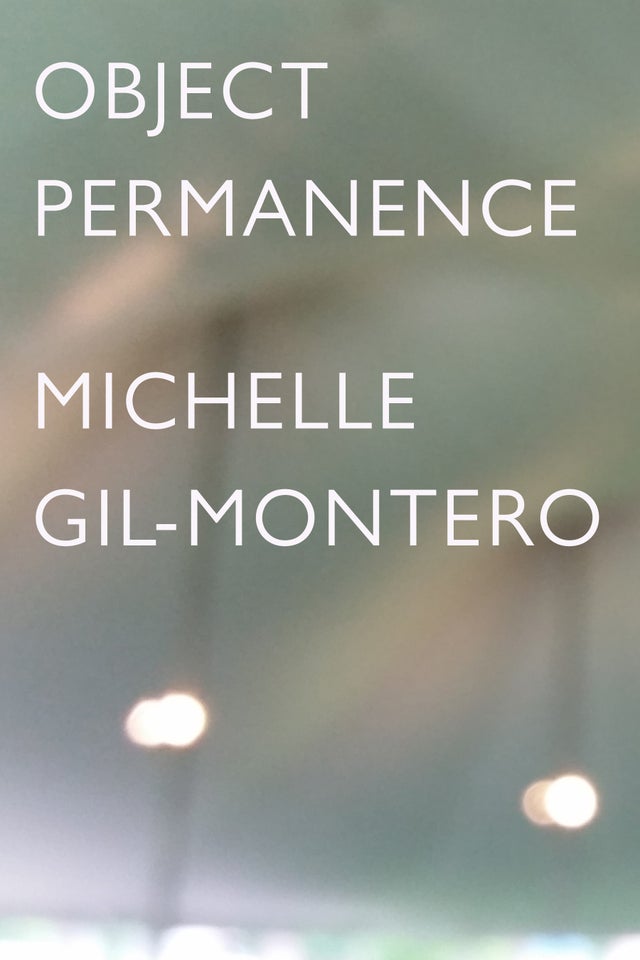 Shipping within the U.S. is via media mail at a flat rate of $3.00. Due to the high cost of international shipping, if you live outside the U.S. there's a good chance you'll pay less if you order from a source closer to home.

Add to Cart
“Object permanence” refers to the early developmental stage in which the child learns that the world exists independently of one’s own ability to perceive it. In this, her first full-length collection of poems, Michelle Gil-Montero unveils the elusive debris of daily life in order to invoke, paradoxically, its impermanence. These poems summon the liminal world of early motherhood, of early morning, of seasons in transition. Inhabiting a terrain of post-industrial landscapes at once familiar and not—a space where what isn’t encroaches on what is—Gil-Montero’s pitch-perfect, emotionally resonant lyric lines pressure the expressive possibilities of language. Sound hovers on the verge of becoming object. Object threatens to evaporate into sound.​
​

"By equating the voice to a “trickle,” Gil-Montero signals the materiality of the voice, a key motif in Object Permanence. In the poem “Sequence,” we find another instance, this time highlighting the gender politics of the voice with its Rapunzel-like figure “[m]ezzanined / by parentheses // her voice / trains its fingernails to curl // over the balcony.” Later, in the aphoristic “Seasons,” Gil-Montero describes how “voices age / husked, othered / equally by nudity / and cover.” This constant othering of the human voice throughout Object Permanence seems consistent with the aims of the ecolyric since, as Lisa Robertson notes in “Disquiet” the “prosody of noise parses a discomfort that uncovers, in its unstable caesura, the fact of the citizen’s material fragility.”

In light of the collection’s themes of silence and the unspeakable and its particular sensitivity to how gender operates on language, I am reminded of a different line from Pizarnik’s poem “Cornerstone”: “I cannot speak with my voice, but I speak with my voices” (Yvette Siegert’s translation). In her essay “The Disappearers” Cynthia Cruz writes, “[h]ow much conforming, I wonder, can an artist do before her language and her work are no longer her own? What happens when she loses her own vernacular? In the end, the choice seems to be learn to speak in the majority language and, in this act, lose one’s self, or refuse, speaking in silence, in iterations of silence.” Compare this to “Sequence,” in which Gil-Montero tells us, “[t]he best defense is stillness.”

— Zack Anderson, “Worldly hum that no one can explain”: Noise and Ecolyric, Action Books blog, August 2020


"Poet and translator Michelle Gil-Montero’s language, chiseled by acute observations of her intimate and liminal surroundings, is a dazzling constellation of what Roland Barthes calls “speckled with these sensitive points.” These “so many points” poke and puncture our internalized rigidity and borders, giving us access to an alternative universe of tenderness as well as vulnerability. Gil-Montero is without doubt one of the rare, gifted and fierce poet-translators working today."

​
"Where did these poems come from, I wonder as I read them, and what are they. They are confessional if spider legs dance profanely. They are domestic if a mother is ether. A wasp nest “chews down to a center room”: they are architectural, then. And spare, like a scattering of rivets, or like hipbones. Michelle Gil-Montero turns words into objects, as did Niedecker and Stein, but the objects do witchy things. “Sequence” sequins up a naked spine, closing a sundress. Clouds “nudge nothing.” An arm and a chin, cradling a violin, become a visual palindrome. This poet’s voice is both ancient and intimate, mysteriously narrating how it is we all (as earthly creatures) live in searchlight and havoc, in stillness and floods and a fog that hugs us with “odd fondness.” What is the quality of a gem-cutter that cuts just the right yellow topaz with just the right facets, and the jeweler that drops it just once, because she knows where and how, into just the right setting? That’s Gil-Montero’s quality of attention. Few poets writing now have it."


"With their paradoxical co-embodiment of impulse and exactitude, Michelle Gil-Montero’s lyrics remind me of Marosa Di Giorgio’s work, and of a neuron’s. Here poetics is physics: what’s linked in a few syllables of sound and association can have at once dazzling and coruscating effects— “close storms, braille music” —depending on the scale or closeness with which it is perceived. Thus the lyric’s intimacy is both gorgeous and terrible, human fluency both a delicious and an unbearable double valence, an aptitude for being turned simultaneously both inside and out. As a multi-lingual poet and translator who has brought the most complex and lyric propositions into a reactive, dynamic English, Michelle Gil-Montero knows that virtuosity appears effortless because of the extreme pressure which fires it: it springs through a torqued synapse, puts the twist in the Mobius strip."


"Consider this poem, from her elegant, elliptical, and deeply beautiful collection. It’s the last in a
series entitled “Seasons”:

the kiss through
cloth however
confused

wet bag of fruit
last of the season

This is a poetry intent on illuminating the spaces absence provides us with; the uncanny way
they embody the most ephemeral kinds of presence, the ones that actually comprise our daily
perceptions and experiences of life, if only one knows what to attend to. Haunted by scission,
the poem glimmers with traces of eros and departure, and is representative of the book as a
whole: a set of exquisitely modulated meditations on the interplay of here and elsewhere, an
impermanent fullness and a central disappearance. Indeed, so many of her poems seem to
disappear into themselves, leaving behind little more than whispers and traces, a trail of
shadow vowels and retinal nocturnes."
​
— Patrick Pritchett, "A Review of Object Permanence by Michelle Gil-Montero," Marsh Hawk Review, Fall 2021